The D39 Education Foundation thanks the parent volunteers who lead our LAB39 Enrichment Classes!

They generously share their time and expertise in science, math and engineering with our students during their 8 weeks together.

Michelle is the proud parent of an 8th grader at WJHS, and a Sophomore and a Senior at New Trier.  Michelle’s background is in consumer marketing, primarily focused on brand strategy, product positioning and new product development. She has worked for a variety of consumer packaged goods companies including Pepsico, Del Monte and Yahoo! Most recently, she has worked for Northwestern managing outreach for their MBA program, and teaching a Consumer Behavior class to undergrads.  Michelle has an MBA in Marketing from Indiana University and a BA in Psychology from Notre Dame.

Alma is a mom of 3 boys – a 7th grader at WJHS, a 5th grader at Highcrest, and a 2nd grader at Romona. She a returning SO/STEM Enrichment leader. She is an Internal Medicine physician practicing Hospital Medicine at Advocate Lutheran General Hospital, where she completed her residency training. She is a graduate of University of Sarajevo. Alma is part of the teaching faculty at the hospital, teaching medical student and residents in all stages of learning and medical training. She has an evolving passion for medicine, especially physiology and diagnostic medicine. She is an avid supporter of living a healthy lifestyle to benefit mind and body, including physical activity and proper nutrition. She enjoys spending time with family, traveling, camping, hiking and practicing yoga.

Tony is a parent of a WJHS 8th grader and Highcrest 5th grader. He has been working the past 13 years as a Principal Staff Reliability Physics Engineer at Continental Automotive, where he is responsible for development, thermal, vibration, structural modeling, analysis, and testing of various electronic packages used in an automotive environment. Prior to this, he worked for Motorola for 10 years as a Six Sigma Black Belt & Mechanical Staff Engineer. Asghari has a Bachelor of Arts degree in Economics, as well as Bachelor of Science and Master of Science degrees in Mechanical Engineering from the University of Illinois in Champaign/Urbana, Illinois.  He enjoys fly-fishing, snow skiing, camping and travelling with family.

Liesel is a parent of a 6th grader at Highcrest, and a freshman and junior at New Trier. Liesel is an outpatient orthopedic physical therapist in Wilmette. She has a Master of Science in Physical Therapy from Washington University in St Louis. She has worked at the University of Chicago Hospitals, Accelerated Rehabilitation Centers, and currently at Pilates Central in Wilmette. She has been a clinical instructor for physical therapy students during her entire career. She loves teaching her clients how their bodies work while teaching them how to feel better. In her spare time, she enjoys running and playing paddle tennis.

Richard and Jerich Lee – Do the Cube

Richard is a parent of five, 3 boys and 2 girls, one of which is a 6th grader at Highcrest. He is a graduate of the Illinois Math & Science Academy and Harvard University with an A.B. in East Asian Studies. He has worked in various areas of finance, including private equity and equity research, focusing on technology and media investments.
Jerich is a junior at New Trier and is the founder of Genius Cubed, a non-profit dedicated to teaching kids how to solve the Rubik’s Cube. His personal best time of solving the 3×3 cube is 4.7 seconds, which places him among the fastest in the world. He is also top-ranked in the one-handed and blindfolded events. They love teaching how to solve the cube as it is one of the best ways to instill confidence and promote true grit.

Greg  is the parent of a three daughters who are graduates of Highcrest and WJHS.  Greg is returning for his seventh year as a SO/STEM Enrichment leader.  He is a registered patent attorney with a background in aerospace engineering. Greg obtained his undergraduate degree from the University of Illinois, and graduate degrees from Stanford University and the University of Chicago. He works for Hollister Incorporated (a medical device company) as its Asst. GC and Chief Intellectual Property Counsel. His interests include tinkering with cars (both real and R/C), traveling, skiing, music, and playing golf.

Chris is a proud parent of a fifth grader in Highcrest and freshman at New Trier. He is a board-certified internist on staff at Advocate and NorthShore Health Systems. He graduated from the combined B.A./M.D. program at Northwestern University and also holds a Master’s degree in physics from Caltech where he spent three years doing research in experimental high-energy physics. Chris is also a patent agent, programmer and a developer of electronic medical systems. For the past seven years Chris has been working with Guatemala’s Ministry of Health to develop a sustainable health care system for native Mayan communities. The system has been successful in the district of Chimaltenango, and is currently being replicated in other rural areas of Guatemala.

Christopher is the father of twins at Highcrest Middle School.  He is the Chief Engineering Officer at F. E. Moran, one of the Chicago area’s largest mechanical construction firms. He is the holder of a BS in Engineering Physics from the University of Illinois College of Engineering.  While an undergraduate, he worked in the Laboratory for Atomic, Molecular and Radiation Physics designing and building instrumentation for the investigation of femtosecond/terawatt laser tunneling phenomena. Today Chris spends whatever free time his wife allows him to have designing and building electronics and experimenting with spectroscopy and additive manufacturing technology.   He is particularly looking forward to being able to geek out with the SO/STEM Enrichment students. 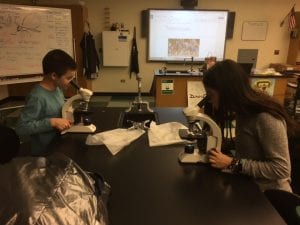